Journal of the American Academy of Religion recognizes "A Theology of Justice" by Larry Donell Covin Jr.

"Congratulations to Larry Donell Covin Jr. on the publication of A Theology of Justice: Interpreting John Rawls in Corrections Ethics-An Ethnography " 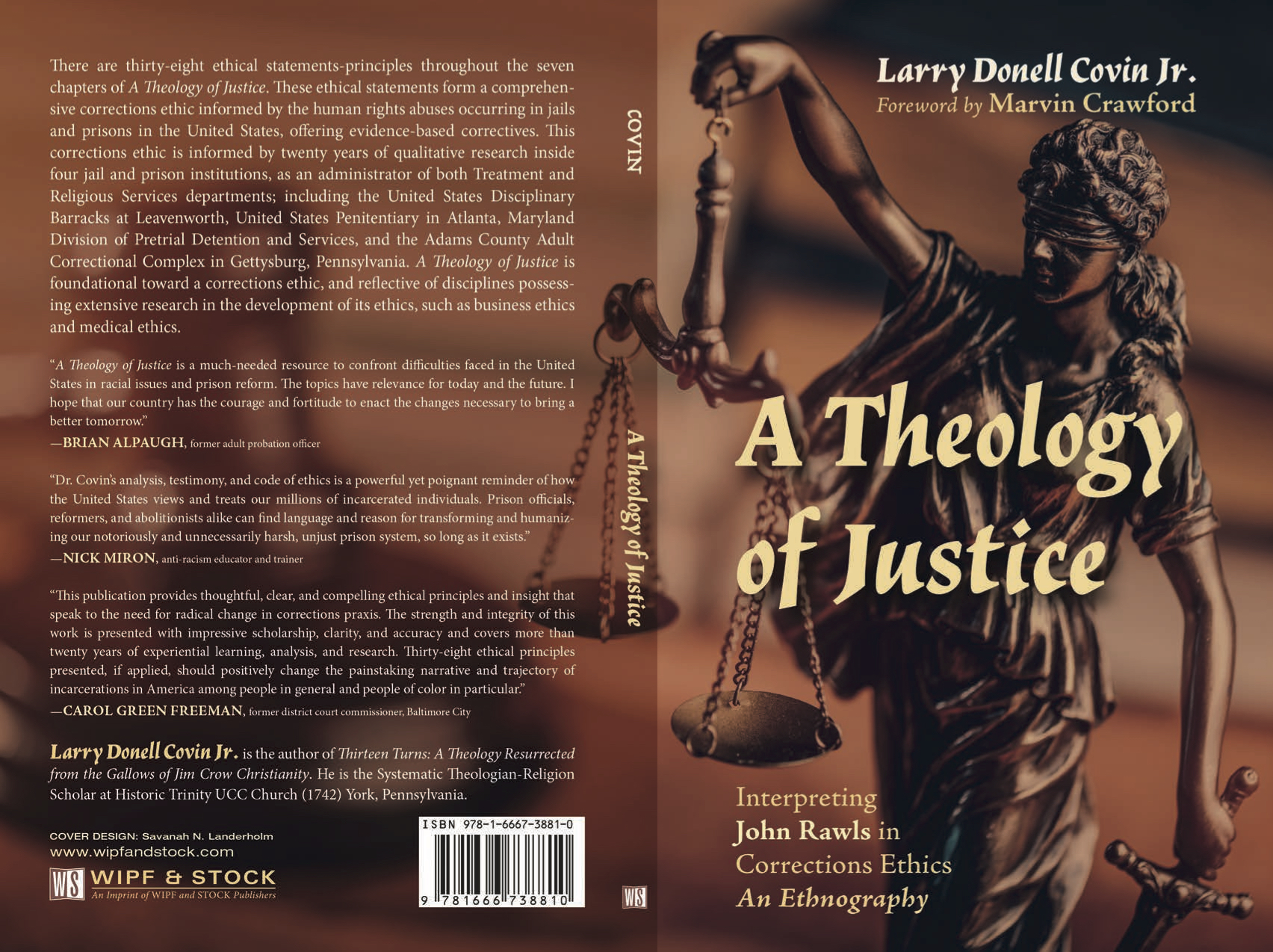 Dr. Covin will be giving a public lecture in Lancaster, Pennsylvania, to include a discussion of excerpts from Thirteen Turns: A Theology Resurrected From The Gallows of Jim Crow Christianity. Tickets are limited for this event. You may contact The Parish Resource Center for additional information at 717-299-1113.

Now available at this Washington DC cultural landmark. Host to many of the most notable authors in literature. 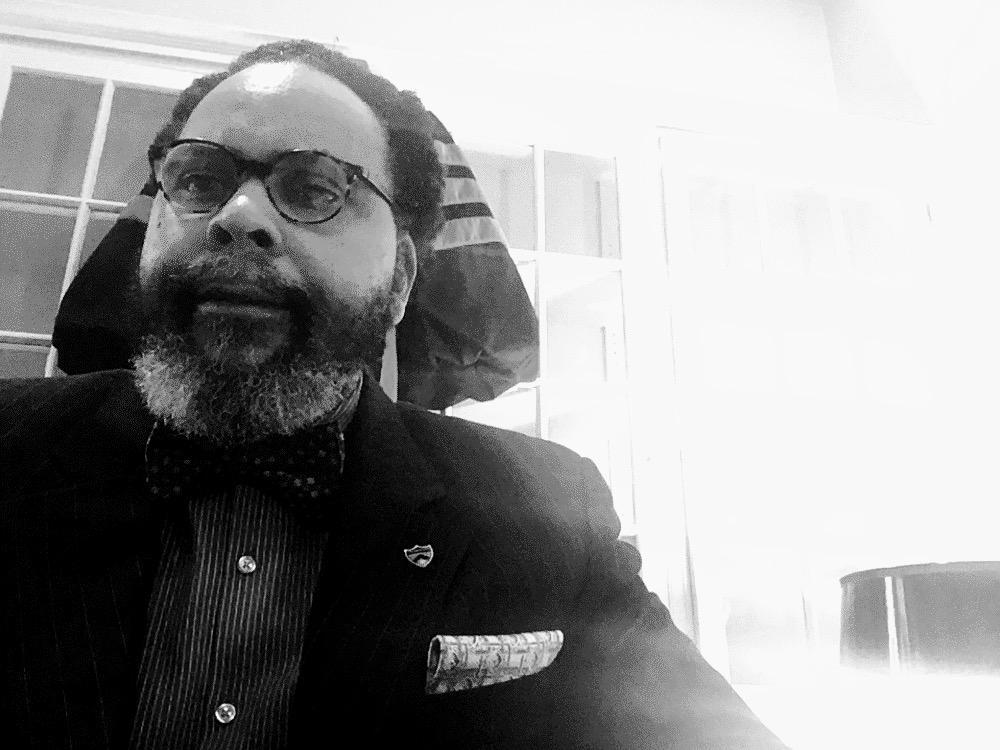 Visit this Independent Bookstore in Louisville, Kentucky, and read their amazing story!

Larry Donell Covin Jr is the author of:

Thirteen Turns: A Theology Resurrected From the Gallows of Jim Crow Christianity published by Wipf and Stock 2020. (Book)

Homelessness Poverty and Incarceration: The Criminalization of Despair published by Taylor and Francis 2012. (Journal)

Larry Covin's expertise in, and advocacy for the poor and criminal justice reform in his writings, is now utilized by the U.S. Department of Justice at ojp.govlarrycovin.

He studied under, and was a student of, two theologians venerated as icons of the Liberation Theology movement. First, Gayraud Wilmore of the Interdenominational Theological Center of Atlanta University; and Albert J. Raboteau of Princeton University and Princeton Theological Seminary.

George Hunsinger, another Systematic Theologian of whom Larry Covin studied under while at Princeton, has been significant in influencing the thinking and theology of Dr. Covin.

However, there has been perhaps no other theologian more prominent in the formation of Dr. Covin, than the Yale Theologian Lee Barrett, the theologian and philosopher Soren Kierkegaard Scholar par excellence; under whom Larry Covin studied for three years.

Most notably, his authored work titled-Homelessness, Poverty, and Incarceration: The Criminalization of Despair, published by The Journal of Forensic Psychology Practice, can be found in libraries at Princeton University, Harvard University, Massachusetts Institute of Technology or MIT, The University of California, Berkeley, and The Bodleian Library at University of Oxford, England. For a more detailed description, visit the library website of each university, click on search Larry Covin.

Larry Donell Covin, Jr., is a nationally and internationally recognized expert and scholar; in the discipline of social justice, corrections ethics, theology and law, liberation theology, as well as homelessness research. His research is often used in the publication of peer reviewed journal articles by scholars around the world.

The following are publications citing and utilizing Dr. Covin's work, and can be accessed for further research in the various disciplines. These are as follows:

~The Positive Impact of Project-Based Learning on Attendance of an Economically Disadvantaged Student Population. By Kathy Creghan in Interdisciplinary Journal of Problem-Based Learning. (Dr. Covin Cited)

~Factors That Contribute To Homelessness From The Perspective Of The Homeless. By Johnetta Hardin, Indiana University ProQuest Dissertations. (Dr. Covin Cited)

~Study of Adults Who Were Homeless when They Desired, Tried, or Succeeded in Pursuing a Post-Secondary Education. By Adamma Anyaehie Griffith, Widener University. (Dr. Covin Cited)

In short, a search of the majority of college and university libraries in the United States, as well as abroad, will produce housed in their catalog of collections, the intellectual contributions-scholarly writings and pedagogical contributions of the work of Larry Covin. Larry Covin's scholarship in the discipline of ethics, theology, and criminal justice ethics reform has been well documented in institutions of higher education.

Dr. Covin's book published in 2020 is Thirteen Turns: A Theology Resurrected From the Gallows of Jim Crow Christianity, which builds upon his previous scholarly work, and is considered as foundational and essential work in Liberation Theology studies. The following is an excerpt taken from the cover of Thirteen Turns. "It is remarkable that African Americans, the descendants of slaves, embrace Christianity at all. The imagination that is necessary to parse biblical text and find within it a theology that speaks to their context is a testimony to their will to survive in a hostile land. Black religion embraces the cross and the narrative of Jesus as savior, both theologically and culturally. But this does not suggest that African Americans have not historically, and do not now, struggle with the reconciliation of the cross, black life, suffering. African Americans are well aware of the shared relationship of Christianity with the white oppressors of history. The religion that helped African Americans to survive is the religion that was instrumental in their near genocide."

In 2012 Dr. Covin authored--The Constructing of A Contemporary Corrections Ethic In The Tradition of Social Contract Theory: An Extrapolation From The Work of Political Philosopher John Rawls, published by ProQuest as his Doctoral Dissertation.

Dr. Covin's latest book published June 2022 is titled, A Theology of Justice: Interpreting John Rawls in Corrections Ethics ~ An Ethnography and is published by Wipf & Stock. An excerpt taken from the cover reads as follows. "There are thirty-eight ethical statements-principles throughout the seven chapters of A Theology of Justice. These ethical statements form a comprehensive corrections ethic informed by the human rights abuses occurring in jails and prisons in the United States, offering evidence-based correctives. This corrections ethic is informed by twenty years of qualitative research inside four jail and prison institutions, as an administrator of both Treatment and Religious Services departments; including the United States Disciplinary Barracks at Leavenworth, United States Penitentiary in Atlanta, Maryland Division of Pretrial Detention and Services, and the Adams County Adult Correctional Complex in Gettysburg, Pennsylvania. A Theology of Justice is foundational toward a corrections ethic, and reflective of disciplines possessing extensive research in the development of its ethics, such as business ethics and medical ethics."

Dr. Covin is a faculty member at the Schaefer Center for Public Policy-Maryland Certified Public Manager Program at the University of Baltimore, where he teaches Public Policy Ethics.

American Academy of Religion featuring A Theology of Justice

A Theology of Justice at Authors Guild Interview

Dr. Larry Donell Covin, Jr., is available as a lecturer, as well as writing consultant for aspiring authors.

Dr. Covin's scholarship in social justice is recognized in The American Middle Class: An Economic Encyclopedia of Progress and Poverty by Professor Robert Rycroft, Professor of Economics at University of Mary Washington.

Dr. Covin's article on criminal justice reform is featured on the Office of Justice Programs website at the U.S. Department of Justice.

Homelessness, Poverty, and Incarceration:The Criminalization of Despair at Universities and Colleges in The United States and Abroad

Perusall Website "We aim to change the nature of reading-from the traditional  solitary experience to an engaging and collective one. We aim to change education-so all students do the reading, come to class prepared, and are motivated to do so because they care about the content. And we aim to advance behavioral science and AI research in the service of improving education-using our work at Harvard University and Perusall Labs to improve the Perusall platform and to help students, educators, researchers, and society at large."

On The Quad at Princeton Theological Seminary

Meet my publisher-Wipf and Stock

Homelessness, Poverty, and Incarceration: The Criminalization of Despair by Dr. Larry Covin

Published in The Journal of Forensic Psychology Practice by Taylor & Francis

The Constructing of a Contemporary Corrections Ethic in the Tradition of Social Contract Theory: An Extrapolation From The Work of Political Philosopher John Rawls by Dr. Larry Covin

This review of Thirteen Turns: A Theology Resurrected From The Gallows of Jim Crow Christianity, is a departure from the international acclaim the book has received--and is an interpretation from the local community from which Dr. Covin is based.